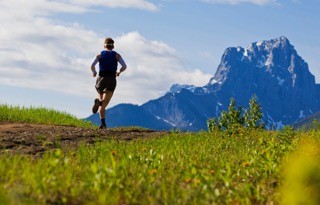 Most experienced runners, especially longer distance runners, have at some point in their lives experienced the serious pain of over-exertion. Beyond the muscle ache, headache and the crushing fatigue there's another problem: serious gastro-intestinal distress. This means that when you can barely move and just want to crash, you're racing to the bathroom as fast as your exhausted body can get you there and experiencing the throes -- and throws -- of an extremely upset stomach.

The problem is that when you're running and basically in the fight-flight mode, blood is diverted away from your organs and to your muscles, so you can effectively run or fight. That's great for your muscles but terrible for your organs like your stomach, which are now effectively paralyzed. Without blood flow to stimulate digestion it just doesn't happen leading to two problems: GI distress and the inability to immediately and quickly rectify the problem. Drinking fluids at this point isn't much good because the digestive system isn't working and you're likely to throw all that fluid right back up. You're in a vicious circle with the emphasis on the vicious.

That's where our IV Fluids for runners comes into play. Because IV fluids effectively bypass the digestive system, they are quickly absorbed into the body, going straight to the cells, restoring energy faster than anything you can do orally. In an online article entitled Dehydration and GI Distress For Runners by runner Caitlin Chock, published in August, 2014, the author quotes performance nutritionist Dr. Krista Austin as follows: “If you get dehydrated you can’t eat because you need blood flow into the stomach to digest.”

So, hydration is critical not just before a race but especially after it, too. And sometimes you can be so dehydrated that it's too late to turn to simply swigging water or sports drinks for the answer. That's when you call the IV doc.

Dehydration doesn't just occur when running marathons or even half-marathons. It can occur at any time, even during workouts. Workout dehydration can be just as bad as race dehydration.

There are numerous plans about how to properly hydrate for a race or even a workout. Many people like to run early in the morning, either before work and/or before the temperature rises. The problem there is that we typically dehydrate when we sleep. Glugging some water before you hit the road may simply not be adequate enough to overcome your night time dehydration, let alone keep you hydrated as you pound the pavement. One simple rule of thumb: don't even consider running or working out until your urine is as clear as your windshield immediately after the most expensive car wash you can find. Then you need to hydrate for the run or workout.

One well-known runner advises taking 10 ounces of liquid and 100 calories of a sports drink for every 5K that you run. And if it's hot and/or humid, double the amount.

The recommendation about the sports drink comes from the fact that we don't just need fluids we need electrolytes, like salt and potassium, too. Which is why our IV Fluids runner's package includes all these important extra nutrients you need, in addition to the H20. The key to sports drinks is the electrolytes, not necessarily the calories.

If you're a runner, and especially a long distance runner, you simply cant afford to get dehydrated because it can be a long and often agonizing process to get your body back to normal. We can't run the race for you but we can help you recover as quickly as possible.

check out our IV fluid packages for runners.