The Hamptons IV Doctor is in: Physician offers drips for the hungover 1% 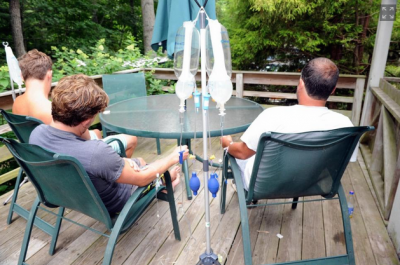 The East Hampton summer share looked like a scene out of “Animal House”: a pizza box on the counter, a half-empty bottle of wine on the coffee table, dishes piled high in the sink and crushed beer cans out back on the deck.

But for the home’s six “Great Fratsby” buddies, help was on the way.

The group’s hardest partier had hired the IV Doctor, a bedside hydration service, to fix him up after drinking “20 beers or more” — on top of countless tequila shots the night before.

“I literally feel better already," said John, the 28-year-old landscaping consultant from the Lower East Side as the IV flowed through his veins like a beer through a bladder.

John got a standard fluids drip with a proprietary blend of saline and nutrients for $199, but the company offers several customized IVs, including versions with Zofran for anti-nausea or Toradol for that pounding headache.

A “deathbed relief” featuring a double-bag treatment with anti-nausea, anti-inflammatory and anti-heartburn meds costs $249. Supplemental vitamin injections are also on the menu, costing $75 to $150.

"It's a really effective tool to feel better,” said Mike, 32, a physician's assistant who administers the drip of life. “Medical clinicians have been doing this for many years."

Not all docs are sold on the service — mostly because meds get to the patient only a few minutes faster via IV instead of orally.

"Getting IV fluids neither increases the rate at which you become sober nor does it (negate) effects you have from a hangover," says Dr. Lewis Nelson of NYU Langone Medical Center. "There's no good data to support any of these treatments. They are probably safe, but ... most people would take a couple analgesics and rest for a couple days."

But John has used the service twice, calling it “a good experience.”

Father-and-son physicians Elliot and Adam Nadelson founded IV Doctor in January to help the hard-partiers of New York City, but a company rep told The News that it has seen an uptick in sloshed socialites this summer on the East End.

Watching Mikegive the treatment is like watching a reality show hybrid of “Jersey Shore” and Dr. Oz’ “NY Med.” Like any trained pro, Mikeevaluates each boozed-up patient, rejecting anyone who is still too drunk to be injected. Then he hooks up the next victim.

John’s housemate, Jimmy, 35, a finance worker from the Lower East Side, opted for a drip with Zofran and Toradol, which are light doses of the powerful drugs.

He’d had four beers the night before, which made him feel “just kinda tired and cloudy.”

After, he felt like he’d had two cups of coffee and some of that leftover pizza — long known as a hangover cure.

"Now I feel hydrated and better, (with) no headache," he said. "I feel like I didn't drink last night."

Meanwhile, John was absorbing IV fluid like a camel in the desert.

"He seemed to be really dehydrated because it infused very rapidly," Mikesaid.

The treatment took 15 minutes and left its boozehound a new man.

“I feel more awake (and) energetic,” he said.