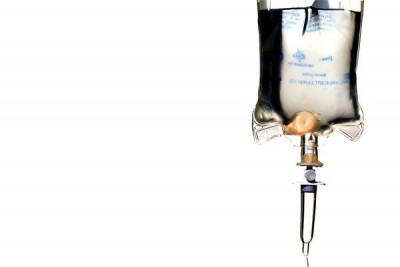 How many times have you woken up wondering why you had that last drink? Not to mention the last three? We get it. We live like you, and thus, we suffer like you. Which means we agree that hangovers are the worst way to start a day, week, month, or new relationship (even if it’s the booze that got you to the beginning of the said relationship).

But what if there was a readily available remedy that was actually for real? We’re not talkin’ about dropping an egg in a beer, downing a double Caesar (that’s just drinking again), six cups of coffee, or an intensely cold shower. We mean something with an M.D. behind it. Well, as luck would have it, there’s a service out there that’s currently gearing up to kick your hangover to the curb – guaranteed.

The I.V. Doctor is a real thing. It might not be servicing Canada just yet, but with a little success, we can’t expect it’ll be too long before these white-coated heroes sweep in and make us forget all of last night’s regrets. Cause the thing is, all that water you’re downing all day to reduce the pounding in your head will, at best, do about half the job that the good ‘ol ‘party-girl drip’ can do in less than an hour.

Here’s how it works: You become a member. That gets you two free ‘revive’ services a month plus a reduced rate on any others you might need. It ain’t free, though. If you want to party like a rock star and still feel like one in the morning, it’s gonna’ cost you around $300 a month just to join. However, that seems like a small price to pay to have a medical professional meet you at your home, hotel, or even your office to “administer I.V. hydration therapy consisting of fluids with or without the addition of medications for nausea, heartburn, and headache.” This means that you’re not even losing an hour of your day just to get better! You can still talk, text, write and produce while the ‘therapy’ is being administered. We wouldn’t recommend pulling your IV along with you into a meeting, though – might be a bit of a tough sell. Or, hey, it could show your commitment to coming to work sick… we’ll let you decide how to play that one.

Of course, the benefits of hooking into an IV aren’t just limited to fixing last night’s transgressions. This quick remedy will help fight jet-lag, flu, marathons (well, at least how much they take out of you), and basically anything else that’s got you feeling down. So yeah, the next time you’re out having one too many you should probably raise a glass to science for saving you from yourself. And don’t worry, we’ll let you know as soon as these guys get their act together and realize that Canada’s national drink is beer.