Hangover Cured by an IV 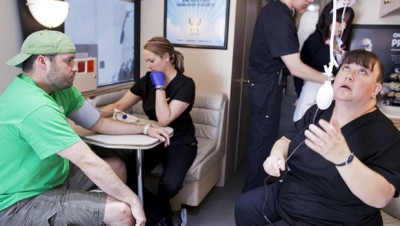 Hangover cures usually involve a specific type of food or drink. Some of them work while others do not. One cure does not involve either but relies on an IV. People can now be cured of their hangover by being connected to an IV or intravenous bag of saline fluid. A person is able to absorb the fluid better when it is administered intravenously. Three places are using this idea to cure people who are sick from hangovers or an illness. A clinic in Louisiana called Remedy Room is the first place that is using an intravenous bag with vitamins to cure hangovers. Dr. Mignonne Mary started the clinic last summer and focuses on infusion therapy to treat people. Mary says the clinic is offering hydration to people who are dehydrated from any illness and that hangovers get people’s attention because she thinks people are used to suffering. The intravenous bags are filled with saline, vitamins and other supplements such as anti-nauseous medication.

Mary is a board certified internist, has a degree of medicine from Louisiana State University Medical Center and has been practicing medicine for more than a decade. A person can pay $149 for one session that lasts 45 minutes. Mary says that it is great to see her patients get well before her eyes because that does not happen often in medicine. Patients are tested before they are given any intravenous medications and she does not take people who are intoxicated.

Revive is a second clinic that uses infusion therapy to rehydrate people who are ill or after they had a long night of drinking. Dr. Jack Dybis, who is a trauma surgeon at Evanston Hospital near Chicago, opened the clinic three months ago. Dybis can cater the saline solution to a patient’s needs by adding a headache or nausea medication to the bag. People are asked about their medical history before they are connected. After a person is hooked up the intravenous bag, they are moved to a separate room that offers different amenities such as magazines, coconut water, lounge chairs, peppermint gum and desks. Claire Suddath, a writer forBloomberg Businessweek, tried the clinic and said it worked. After an hour, her headache disappeared and she felt better than she did when she was working. The session costs $99 and takes about an hour.

The final location that cured people of their hangover with an IV is mobile. The IV Doctortravels to different locations to deliver the intravenous treatment. The company employs accredited, experienced, licensed and board-certified physicians and medical professionals. It lasts 30 minutes and varies in price. A person can pay $199 for the basic level, called cleanse and up to $249 for revive, the highest level. They can also add B12 for an additional $75.

People can be cured of their hangover by using an IV after visiting the Remedy Room, Revive or the IV Doctor. These locations use infusion therapy to hydrate people who are either suffering from a hangover or an illness. Certified physicians or medical professionals also run them. Dr. Michael Oshinsky, who is a hangover headache researcher for Jefferson Medical College in Philadelphia, says that the symptoms of a hangover happen because the liver converts alcohol into acetaldehyde, a toxin. The liver then turns the alcohol into another toxin, acetate, which is responsible for headaches. Oshinsky also says that since alcohol is a diuretic a person can become dehydrated and lose electrolytes. The above services can range in price from $99 to $249, depending on what company the person chooses.These quick cures offer a safe way to get over a hangover.