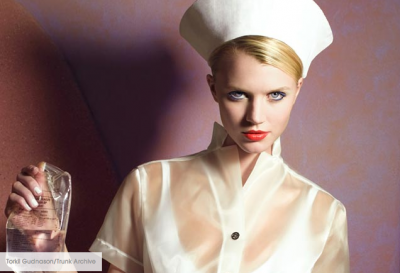 Last night was epic. Jen, Aimee, and Amy hit the Las Vegas Strip to test the strength of the bottle service at the Bank, a nightclub nestled inside the Bellagio hotel. The twentysomethings mixed their own vodka cranberries, sucked down shots of Jack, twerked on tables, posed for their iPhones, stumbled out of the club, inadvertently mooned the casino’s guests, and, finally, vomited in the elevator. The party ended at 3:30 a.m. The hangover was just beginning.

At 10 the next morning, the trio files into an idling tour bus in oversize sunglasses and last night’s eyeliner. Appointed with cream leather seats, drawn shades, and piped-in soft rock, it’s a miniature retreat parked in the center of sizzling asphalt. They’ve come here to rehash the details of their evening alcohol binge and to try to erase every last trace of it from their bodies. “I threw up a lot last night,” Aimee says. “I’m surprised I’m not barfing my eyes out right now,” adds Jen. Amy pinches her eyes shut and softly contributes: “Just talking about this is making me  feel sick.” They pay $99 each and surrender their inner forearms to receive an intravenous cocktail known as the Party Girl Drip.

Related:I Tried a Sami Zen Treatment to Cure My Hangover

We’re at Hangover Heaven, a mobile rehydration boutique that trawls the Vegas morning for depleted partyers, then hooks them up to an IV packed with vitamins, antioxidants, and electrolytes that promises to cure  the nausea, headache, bloating, and even the undereye circles and sallow skin that accompany the common hangover. At the wheel is Jason Burke, a board-certified anesthesiologist turned hangover specialist with a Herculean jaw and a Duke MD. Burke fills three  pediatric-size IV bags with his custom-blended concoction, steadies a needle in each woman’s vein, and lets it drip directly into her bloodstream. The process doesn’t take long. Burke’s patients come to him swearing off alcohol, he says, but after a 45- minute hookup, “Suddenly they’re like, ‘Hey, What are you doing tonight?’ ”

Binge drinkers: Meet binge recovery. Since Hangover Heaven’s first ride in 2012, a suite of high-end IV-hydration shops have popped up nationwide. At Reviv Wellness Spa, Miami Beach partyers can absorb a “Royal Flush” infusion filled with nausea-fighting medication and anti-aging glutathione for $195 a bag. Chicagoans can get their Botox, Latisse, and IV treatments together at the one-stop IVme Hydration Clinic. And New York City’s new IV Doctor club makes house calls for up to $249 for what it calls “deathbed relief.”

The IV first got buzz in 2008 when a private club called Tenteki10 began hawking vitamin cocktails to Tokyo businessmen suffering from exhaustion, insomnia, and backaches for about $20 a bag. (For a little extra, the club also offered a controversial anti-aging IV featuring human placental extract.) Four years later, Rihanna tweeted a photo of an IV needle rooted in her forearm, long black talons still installed on her nails from the previous night’s Met Ball. Rihanna’s handlers said it was to treat a bad flu, but coming from pop’s reigning bad girl, that sounded about as believable as the intern calling in sick the morning after the company holiday party. And with one viral photo, the IV cocktail entered the party-girl domain. Madonna and Cindy Crawford reportedly are also fans. In January, Cara Delevingne joined the club when she posted an Instagram pic of two arms with needles in them, one presumably hers and another that her fans speculate was her girlfriend Michelle Rodriguez’s, over the caption “IV dripping.”

Boutique IV centers like Hangover Heaven are typically staffed by some combination of physicians, nurses, EMTs, and medical assistants, and they’re targeting a counterintuitive clientele: health nuts who moonlight as heavy drinkers. Reviv Wellness Spa’s motto is “Work Hard, Play Hard,” and it employs a fitness model as its spokesperson. IVMe says its drip is for when you “push yourself too far beyond your natural limits,” whether at the gym or bar. Jen first tried IV therapy while training to run a marathon last year.