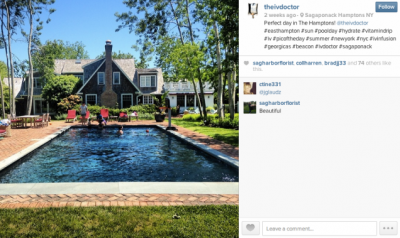 You guys wanna storm the Bastille, or is everyone still recovering from bottomless Sunday brunch?

CNN Money checks inon I.V. Doctor, a service launched back in December by Dr. Elliott Nadelson. The business is pretty simple: Open your wallet, and they'll hook you to an I.V. and pump you full of fluids, along with a combination of meds to soothe your symptoms. Guess what his clientele does. Just guess. You'll never guess! (Yeah, you will.)

While Nadelson said his clients range from European princesses to Olympic track stars, the majority of those who use his service are in finance. It helps when they're working long hours, entertaining clients late into the night and having to perform at a high level early the next morning.

"They're burning the candle at both ends and this helps them get back on their feet quickly," he said.

Because "drink less" and "eat some french fries and just soldier through" are solutions for mere plebs. Not these sunburnt masters of the universe! They've got no time to suffer the consequences of their overindulgence. They've got stocks to trade, clients to fete, money to waste. Or, as one satisfied customer put it:

"We're the work-hard, play-hard type and everyone said they felt replenished."

Who actually talks like that? Though I would be remiss if I didn't note that financiers aren't the company's ONLY clients. From arecentNew Yorkwriteup:

"One of our latest calls was from a group of eight real-estate execs who were coming down from an all-night bender in a beautiful Soho apartment. They each had their own Chihuahua. We sent a team of nurses—they had a brunch they couldn't miss."

They each. Had their own. Chihuahua.

Unsurprisingly, the startup clinic is making a big play for the Hamptons, where they've stationed 12 nurses (compared to 60 in New York City). Here's a little window into the company's social media strat,via Instagram [photo].

If that's your vacation spot the LEAST you can do is have the good fucking grace to suffer your hangover in stoic silence. What a bunch of babies. How much you wanna bet these are the same types of guys whose parents' hired someone topack them up for camp?