For $250, This Nurse Will Help Cure Your Hangover 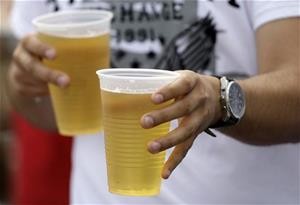 Now, thanks to The "IV Doctor," a service started in December by New York urologist Dr. Elliot Nadelson and his surgical resident son Adam, one's degree of suffering may be at least marginally reduced—for a price. Ailing partiers in NYC and the Hamptons (and, soon, Chicago) with the right kind of pocket change can for $249 have a nurse come to their homes or offices and administer 200ml of fluid by IV, plus a cocktail of drugs to combat nausea (Zofran), heartburn (Pepcid), and headache/inflammation (Toradol). That particular package, called "Revive" is the most popular, and recommended for those on their "deathbed."

"Look, it's not a miracle cure ... but if you go in feeling like a 2, you come out a half-hour later feeling like a 7, that's a game-changer," one repeat customer tells CNN Money. A reporter who tried the service for Thrillist—his prep included four martinis and an "indeterminate portion" of a whisky bottle—notes the advantages of the IV: a higher absorption rate, less peeing, and a quicker impact. He says he ended up "achieving a state of heightened alrightness ... a victory." Nadelson says his team has treated European princesses and Olympic track stars, but that his biggest client base works in finance, "burning the candle at both ends." This service isn't the first of its kind. Hangover Heavenopened two years ago in Las Vegas with a 24-hour clinic and nurses who will make hotel-room visits, and Miami and Atlanta are home toREVIVandHydration Station, respectively. (Hungover? Don'tblame it on this mixture.)

SERVICE OPERATES IN NEW YORK, THE HAMPTONS, AND CHICAGO