This doctor cures hangovers for $250 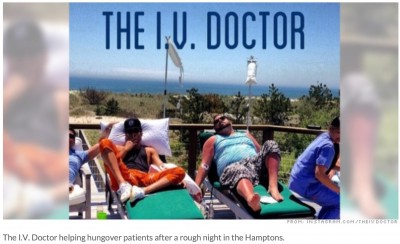 The I.V. Doctor, a service started in December by New York urologist Dr. Elliot Nadelson and his surgical resident son Adam, totes intravenous hydration and other medicine to help quell hangovers to ailing New Yorkers in luxe Hamptons beach homes, and apartments and offices throughout the city.

Dr.Nadelson said the service has about 60 nurses in the city and 12 more in the Hamptons, who set clients up with about 200 ml of fluid, and any combination of anti-nausea, anti-heartburn and anti-inflammatory or headache medicine. The full cocktail of all the drugs, which Nadelson said is their most popular request, costs $249.

While Nadelson said his clients range from European princesses to Olympic track stars, the majority of those who use his service are in finance. It helps when they're working long hours, entertaining clients late into the night and having to perform at a high level early the next morning.

"They're burning the candle at both ends and this helps them get back on their feet quickly," he said.

That's why Jon, a 31-year-old sales trader at a bank in New York who did not want his last name published, started calling the I.V. Doctor back in January. He was going to an event with clients for the Super Bowl and knew it was going to be a "big night," so he booked an appointment at his office the next morning at 8 a.m.

In a small, discrete conference room at his office, a nurse hooked him up to the I.V. bag while he checked emails for the next 40-or-so minutes, and she left in time for him to start his day.

"Look, it's not a miracle cure. There's nothing that really 100% gets rid of a hangover," he said. "But if you go in feeling like a 2, you come out a half-hour later feeling like a 7. That's a game changer."

Since then, Jon said he's had about a dozen appointments and recommended it to all of his friends. He now books an appointment in advance if he knows he's going out at night, so it's all set up for him at the office the next morning before a hangover can really set in.

Nadelson said the company is about more than just curing the over-served. They visit patients who have food poisoning or the flu, and athletes after big games or races.

But it's also about bringing in a new revenue stream.

"It's much harder to be a successful doctor today," he said, though his father still has three offices in New York. "You're starting to see family practitioners doing Botox on the side for money. This business has no overhead and is really catching on."

The Nadelsons aren't the first to climb up the hangover money tree. Hangover Heaven opened two years ago in Las Vegas, with a clinic open 24 hours a day, seven days a week. The services run from $129 to $239 in the clinic, but those who want a nurse to come to their hotel room will pay an extra $200 during business hours and $300 between 5 p.m. and 9 a.m.

The Nadelsons aren't settling for just one city. They're expanding to Chicago this summer and are making a big social media play for potential clients in the Hamptons.

Andreottola and his Hamptons guests were satisfied.

"We're the work-hard, play-hard type and everyone said they felt replenished," he said. "Even some of the server girls we hired for a barbeque got it done and they all said they felt better."
First Published: June 23, 2014: 6:05 AM ET