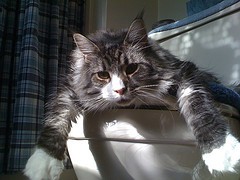 Not the band, no, but one method that purports to take that hangover and turn it into a bad dream. Color me skeptical, but the guy behind I.V. Doctor is an actual doctor, albeit not the kind you might associate with booze, if you were inclined to do such a thing.

He’s a urologist, reportsCNNMoney, and his most popular package goes for $250, providing a cocktail of hydrating I.V. bags and various medications to fix what’s ailing you after a few too many.

The New York doctor and his surgical resident use intravenous hydration and “other medicine” in the service, making house calls to homes and businesses throughout the city, with the help of 60 nurses in NYC and 12 in the Hamptons. Because all those summer parties filled with fabulous people mean lots of expensive hangovers.

And the bulk of his clients, the doc says? People working in finance who work hard and play harder. No, but really.

“We’re the work-hard, play-hard type and everyone said they felt replenished,” one client who’s used the service said. “Even some of the server girls we hired for a barbeque got it done and they all said they felt better.”

Just going to leave that there.

Anyway, you can also call the doc for other common, somewhat related ailments, like food poisoning or the flu, or if you need a recharge after a big game or race.

The I.V. Doctor plans to expand to Chicago this summer, because clearly, hangovers know no geographical boundaries.