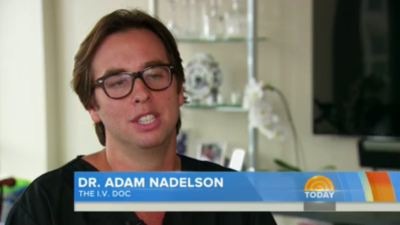 A new kind of “bar” is cropping up in cities around the nation. The establishments tout cures for everything from hangovers to the common cold — delivered not in a cocktail glass but via a needle in the arm.

It’s called “hydration therapy” and it’s becoming the rage, with “treatments” taking about 30 minutes and costing anywhere from $115 to $159.

Customers are pricked in the arm and hooked up to an IV bag containing salinesolutionlaced with vitamins and assorted other “wellness” ingredients.

The HangIVer Bar, in Tampa, Florida, is marketed as a new-age spa offering the latest in therapies.

“The concept is based on wellness, a modern wellness spa that allows people to get treatment for not just hangovers, but for acute illness,” said Dr. Uhuru Smith, an anesthesiologist who opened HangIVer this month.

Hydration therapy has been available in Las Vegas long enough for companies like “Hangover Heaven” to have treated some 20,000 customers on its bus.

In New York City, “The IV Doc” comes to you dispensing its cures during house calls. The company’s CEO and founder, Dr. Adam Nadelson, says most of his customers are seeking rehydration after a hard night of drinking.

“Fifty percent, I’d say, of our patients do come in for hangover relief, from dehydration from the night prior,” Nadelson said.

Patients like Mike Murphy swear by the treatments and say they would “absolutely” recommend them to friends.

Danny Bohrer, who turned to hydration therapy because he was feeling run down, says he felt an energy boost right away. He’s hoping that the treatments will also boost his abilities during basketball games with friends. “I hope so,” Bohrer said. “I need a little bit of help, probably.”

Critics say the IV treatments are just a gimmick.

“I think they’re a little silly,” said Dr. Mark Morocco, a professor of emergency medicine at the Ronald Reagan UCLA Medical Center. “I can’t imagine why anyone would pay money to be stuck with a needle for therapy that’s no better than drinking chicken soup and taking Tylenol at home.”

And while the chances of a bad outcome are small, “there is a risk anytime you break the skin,” Morocco said, adding that those risks include infection or irritation of the vein.