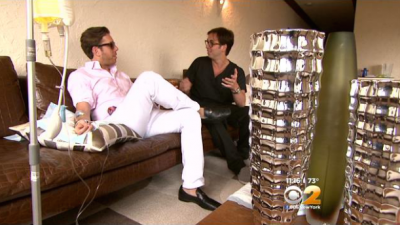 As the busy owner of his own company, Lee says he doesn’t have time to feel sick—which is why he calls for an at-home IV drip.

“They show up in my apartment, I get a proper dose of fluid and Ifeel great within an hour,” he said.

“The IV Doctor”is the brainchild of Dr. Adam Nadelson, who says hisservice has a team of physicians and nurses on standby–ready whenever a patient like Lee calls–to create a special cocktail of fluids tailored to each patient.

“This is for a time when you’ve had too hard of a night or you’re just feeling ill,” Dr. Nadelson said.

The starting price for a bagof the special cocktail? $200.

“We come to you within 30 minutes,” Dr. Nadelson said. “We provide electrolytes, we can add invitaminsor medications for symptomatic relief.”

The relief can be from dehydration, food poisoning or a bad hangover, CBS 2 reported.

“Our clients range from thefinancial world, all the way to actors, actresses, even princesses,” Dr. Nadelson said.

CBS 2 first told you aboutthe IV craze last yearwhen it became popular in spa-like settings in ourarea and across the country.

Doctors say IV treatments work faster than taking oral medication because it has a higher absorptionrate .

But critics argue IVs are not “cure-alls” and warn of potential risks, which according toDr. Gail D’Onofrio,canrange from as simple as inflammation to the vein to more complex complicationslike an infection.

“Then we weigh risks and the benefits of the treatment,” he said.

“This allows me to save time, which in mybusiness , saves money,” he said.