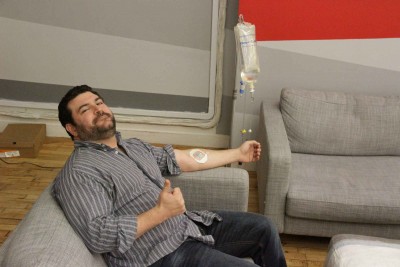 Before whipping together kale, cran-apple, antacids, and five tablespoons of oregano to cure the aftermath of last night’s bender, consider this: there are services springing up across America that offer ER-caliber IV treatment promising to handle hangover symptoms in one step. To get the skinny on the growing phenomenon, we hit up Adam J. Nadelson M.D., founder and head physician at The I.V. Doc for a hot fact injection.

Alcohol dehydrates you on a hormonal level

Alcohol inhibits the body’s anti-diuretic hormones, which help you absorb water from fluids. When those ADH levels drop, instead of taking water in, the body wants to push it out via a bodily function you should be familiar with. But after drinking a beer, not only does that full fluid volume pass right through the body, existing H20 gets drawn out along with. One drink = twice the urine. That’s why an IV drip rehydrates on a level way beyond downing a before-bed desperation glass of water.

There’s a whole cocktail of magic vitamins in these bags

These aren’t typical saline bags; IV services pack their pouches with good-for-yous including the full range of B varieties. You know that lack of coordination and foggy-headed confusion associated with heavy drinking? Well this state is treated directly by vitamin B1.

The I.V. Doc sets a sodium ratio of 130 ml. That syncs up perfectly with the typical levels found in the body. A standard hospital IV is juiced to 150 ml, which is great when you need to recover from invasive surgery or are in traction for months… but it’s overkill when you just don’t want to suffer for staying up ‘til 5am. Also, higher saline levels carry some risk that’s easily manageable in a hospital setting, but not so much on your futon.

Intravenous hydration is way better than just drinking all that stuff

Chugging these bags’ contents wouldn’t taste good and, much more importantly, wouldn’t be very efficient. A much lower percentage of orally consumed fluid (and the good stuff in it) will be properly absorbed for hangover fighting, and it can take hours (vs. IVs, which are almost immediate).

Also, anti-inflammatory meds are way more effective through an IV

The amount of ibuprofen, etc, in one of these drip bags is notably more than you can acquire in a standard over-the-counter dosage, and it’s more effective delivered right to the veins than taken in pill form. That’s because alcohol causes direct damage to the stomach and esophageal linings. While they’re healing themselves, they don’t have time to be absorbing a max dose of headache pills.

If you’re not offered a phone screen that makes sure a) you’re in the proper state of physical and mental degradation to need any sort of drip, and b) your drip solution is catered to your symptoms, you might want to consider a different provider. Or not drinking. Just kidding.

Your body has a maximum capacity for hydration, after which point any fluid simply passes through. But according to Dr. Nadelson, it takes a mere 1% of dehydration for observable sluggishness to set in. Granted, these treatments aren’t cheap, so you’d have to be part of the 1% to do non-hung-over sessions regularly. On the other hand…

Depending on the service, you’re definitely looking at $100 minimum -- this is an elective treatment, after all. But Nadelson says an ER would charge $1,500 -- and that’s a conservative estimate. Just the nutritional part of the solution could run $200, disturbingly reminiscent of the bar tab that has you considering this solution in the first place.