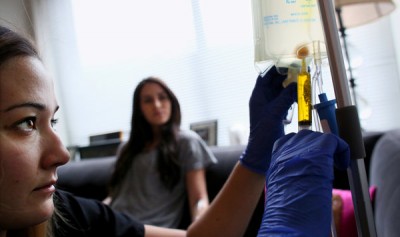 Josh Nyer’s New Year’s Eve blowout is going to be just that: a colossal fest, with 30 friends, rivers of Champagne and vodka, cases of 1942 Don Julio tequila and Caymus wine. By the time 2015 rolls in, chances are Mr. Nyer will have sufficiently overindulged and be grappling with a brutal headache and more than a little nausea.

But Mr. Nyer, 29, a residential mortgage banker in Manhattan, believes he is well prepared for his post-party depression. He has already booked an appointment with theI.V. Doc, a mobile hydration service that will deliver a hangover treatment directly into his arm via a needle, all from the comfort of his own couch.

“I love it,” Mr. Nyer said of the $229 “detox,” which consists of 1,000 milliliters of saline solution and electrolyte replacement fluid, and a choice of nausea, heartburn or anti-inflammatory medication. Mr. Nyer has been known to send the service to clients after a night of heavy drinking and schmoozing.

All that’s required is a vein, an hour and a few hundred dollars.

“All of our patients have a treatment tailored to their condition,” said Adam Nadelson, the surgeon who started the I.V. Doc in 2014 with his father, Elliot, a urologist. Typically, a registered nurse administers the injections, which start at $199 and have become so popular that there are now outposts in New York, the Hamptons, San Francisco, Los Angeles and Chicago.

About 30 years ago, John Myers, a Johns Hopkins University doctor, created the so-called Myers cocktail, an intravenous mixture laced with magnesium, calcium, various B vitamins and vitamin C. But it was a staple of the fringe; mainstream science never embraced it. And it was more to enhance “wellness” than to cure a night of debauchery.

That changed in April 2012, when Jason Burke, an anesthesiologist in Las Vegas, opened Hangover Heaven, a 45-foot tour bus with intravenous drips. (Think “Partridge Family” bus, albeit with saline bags, leather couches and TVs, rather than musical instruments.)

“It’s a unique Vegas experience,” said Dr. Burke, who charges $129. “You get a hangover treatment while driving down the Strip.”

The “experience” attracted so many corporate clients that Dr. Burke began offering corporate packages. (He also came up with the business name Vita Heaven so the home office wouldn’t know what employees were spending their money on.) Not long after, he opened a brick-and-mortar clinic in Las Vegas and began making 24-hour hotel calls for an extra $200.

Customers say it’s a pleasure. They can kick back on plush couches and watch TV while the saline works its magic.

“This morning, I felt like death,” said Angel Higgins, who went to Las Vegas with her husband, James, to welcome her 30th birthday. That they did. Hard. The next morning, they visited Hangover Heaven.

“I feel amazing, which is so scary,” she said as she lounged with her husband, watching “Neighbors.”

The Cedarhouse in Los Angeles features a “shot bar” and public intravenous lounge, for immunity boosting. At the Drip Room in Scottsdale, Ariz., clients can get an energy drip with vitamins B12, B5 and B6; a weight-loss drip, which includes three fat burners and L-carnitine “to help use stored fat and build lean muscle”; and an anti-aging drip with vitamin C, biotin, CoQ10 and glutathione “to plump and smooth your skin,” according to the website. Prices are $99 for members and $149 for non members.

The medical community is not especially impressed. “There’s no scientific support that these treatments do anything,” said Lewis S. Nelson, a toxicologist at NYU Langone Medical Center in Manhattan. He believes the placebo effect is at work.

“It’s basically just hydrating people,” said David E. Bank, a dermatologist and the founder and director of the Center for Dermatology, Cosmetic & Laser Surgery in Mount Kisco, N.Y. “They infuse a one-liter bag of normal saline — for $200. A bag of normal saline costs $4. It’s saltwater.”

But proponents don’t seem to mind the hit to their wallets.

Mr. Nyer said, “It’s nice to know that I don’t have to worry about the next day for those select few nights I know I’m going to be partying hard.”