The I.V. Doc Wants To Be The Uber Of Hangovers 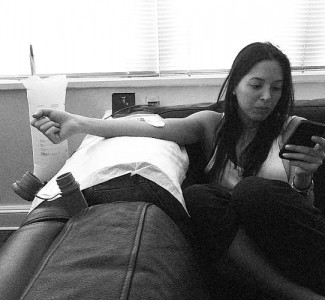 My Valentine's Day wasn't great: After 11 hours of nonstop vomiting, I ended up in the ER with a doctor telling me I needed surgery the next morning. I couldn't eat or drink, so they hooked me up to an I.V. And though no part of the night felt good, the I.V. made me feel several orders of magnitude less terrible.

Until fairly recently, you had to be sick to get intravenous therapy (or know a nurse willing to smuggle equipment from work). Now, however, a startup will bring I.V. equipment to your home to treat any dehydration stemming from any cause, whether it's a late night of drinking, jet lag, or recovery from running a marathon.

In the cities where it is available, the I.V. Doc sends a nurse over in about half an hour. While you sit on your couch and watch TV or text, the I.V. pumps you full of fluids.

"Every treatment is tailored to the symptoms of the client," says a spokesperson for the company. One package, described as "deathbed relief," includes a full combination of anti-nausea, anti-heartburn, and anti-inflammatory medicine along with saline solution and electrolytes. The "detox" package, designed for a hangover, headache, or general exhaustion, only includes one of the extra medicines. Other packages are intended for recovery from illnesses like the flu.

The company claims the fluids hydrate clients faster than drinking water all day, and that many people feel better right away, either getting an energy boost or at least the ability to leave their bed and go to work.

Of course, the results will depend on how sick you actually are—my weekend I.V. didn't magically cure me—and if you're hungover, there's no scientific proof that the I.V. is really better than drinking water over time. This isn't an FDA-endorsed medical treatment, just something that doctors and nurses have been doing informally after a night out for years. But the concept is quickly growing; similar startups, like the Hangover Club, also offer in-home services and even an I.V.-filled party bus that travels directly to bars.

Over the last year, the I.V. Doc spread from New York to Chicago, San Francisco, Los Angeles, Park City, and over the summer, the Hamptons. The clients have cash to burn: One hangover treatment costs $269. If you're recovering from the flu, it's even pricier, at $399. The company argues that it's cheaper and faster than going to the ER if you're truly sick. But for a hangover, does it make sense? I'll stick with a breakfast sandwich, some water, and a nap.

[Photos: via The IV Doc]