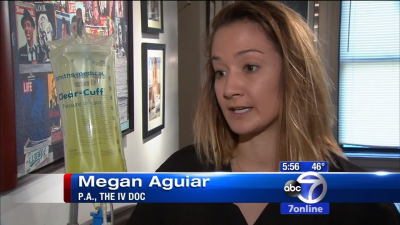 NEW YORK CITY (WABC) --
It's not your typical house call, but if you're looking for a quick pick me up how about an IV drip?

"The end goal is to have as much energy as humanly possible," said Alex Reiff, an event planner.

Reiff wants to bring his A-game to the luxury electronics show, an event he helped plan.

So he's ordered an IV drip from The IV Doc, a company that makes house calls and office calls.

"I'll infuse the bag with a multivitamin, and then I'll give you a little extra boost with some B12," said Megan Aguiar, P.A., The IV Doc.

The drip takes about 25 minutes and Alex can work at his computer the entire time, and he says he feels better almost immediately.

"It's completely the strangest thing I've ever done before in my office, but at the same time this feels really good," Reiff said.

Usually, IVs are given in emergency rooms, but now there are a handful of companies offering custom drips. They are administered by nurses or physician assistants.

Medical history is taken and a doctor signs on if all is OK. Some folks use the drip to combat hangovers, others order drips post flu or stomach virus, and it's the easiest way to hydrate.

"You can drink one of those multivitamin supplement drinks, but unfortunately your body excretes about 50% to 60% of that all the way, this is going directly into your system and it's able to reach all of your cells," Aguiar said.

Reviv is another company offering house calls and it has a location in Chelsea.

Reviv also offers a range of IV services. It was started by several ER doctors who know how helpful an IV can be. Now people get IVs before or after they fly, or when they're feeling lacklustre.

The IVs can also be infused with anti-inflammatory or anti-nausea medicine.

It's wellness in a bag. The downside is just the sting of a needle.

"It goes straight to the bloodstream so it's a quick pick me up," a customer said.

The IVs at these companies generally run from $150 to $300. They're not intended for the very sick.

Doctors Eyewitness News spoke to say there's no big downside to doing this from time to time, but you always run the risk of infection when you're introducing a needle. You also want to make sure you don't offset your body's natural equilibrium with too much hydration.