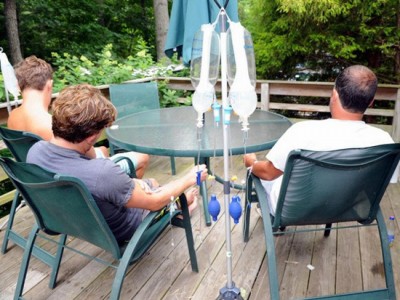 The appointment-based service provides custom drips with the help of nurses or physician's assistants to help alleviate a plethora of problems. "People use the drip to combat hangovers, jet lag, fatigue, headache, nausea, post flu, and stomach [viruses]," says a rep for the company. "It's a luxury service that makes a lot of people feel better quickly." All it takes is a phone call or a visit online to book an appointment.

The original concept started when founder Dr. Adam Nadelson was in medical school, and he and his fellow colleagues would administer saline/vitamin IVs to get them through the long nights and rough days. "The I.V. Doc's hydration is 100 percent absorbed versus just oral intake of 50-60 percent,"says Dr. Nadelson. "Our hydration offers the fastest way to replenish needed fluids and electrolytes [versus] any other treatment."

Shana Scala, owner of branding and public relations company SRS Entertainment, has tried the service after coming down with a flu that left her in physical pain. "I had just seen the I.V. Doc on Instagram [so] I went back to their page, read a few reviews, and booked one for two hours later," says Scala. So, what was the experience like? "It was fast, easy, and it worked," she says.

Still, is the process safe? "Yes, absolutely," says Dr. Nadelson. "It’s a little trick that medical professionals have used for ages... and is administered in an ER daily. But, who wants to sit in an ER for unknown hours with the billing at quadruple the price?"

The company offers several packages depending on your medical needs, ranging from $199 to $399, with the added convenience of having the procedure conducted in your home, hotel room, or office. Customization is also available with add-ons like amino acid boosts and multi-vitamin cocktails.

"It's a great concept and is definitely a luxury service for those who don't want to go to the hospital and be admitted," says Scala. "It's for people with fast-paced lives that like to nip problems in the bud before they get in the way."

While the service might not be for everyone (needles are included), the company continues to expand. The fairly young company, which started a little over a year ago in New York, now treats clients in other metropolitan areas like Chicago, Los Angeles, San Francisco, Park City, and the Hamptons.

Would you try the I.V. Doc the next time you're feeling under the weather?