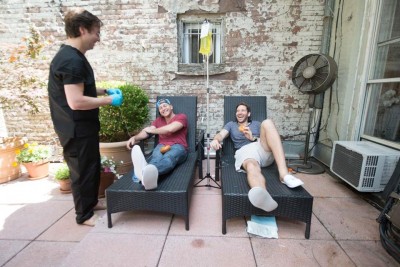 A company that offers to administer in-home intravenous fluids to ease the discomforts of the common hangover says it will soon begin operating in Boston.

The I.V. Doc, which treats clients in New York City, Las Vegas, and Los Angeles, is set to launch here at the end of October, according to company officials.

The company sends out nurses or physician's assistants to people’s offices and homes. The health care workers then hook people up to special IV drips — or “cocktails” — that are packed with vitamins, minerals, or medicine. The drips help clients fend off the effects of exhaustion and fatigue by rehydrating them, the company claims.

The I.V. Doc offers a range of “luxury service” treatments for hangovers, the flu, jet lag, and even food poisoning. Prices for the on-demand mobile services range from $150 to nearly $400, depending on the treatment, according to the company website.

Dr. Adam Nadelson, who is licensed to practice medicine in several states, started I.V. Docs in December 2013 with his father, a urologist with a private practice in New York City. Nadelson said the concoctions that the company uses are safe, and get people back on their feet faster than if they were guzzling water and eating junk food all day — common approaches to combating a head-splitting hangover.

While the treatment might seem a little extreme, Nadelson said the goal is to “help people get back to work sooner, feel better sooner.”

He said every customer speaks with a provider prior to their treatment, ensuring that they get the proper in-home care based on their medical needs.

“What we are doing is treating patients,” he said. “And the most important thing is that patients are safe.”

Rochelle Menda, the company’s chief operating officer, said in an e-mail that “extensive licenses and medical certifications” are required to conduct business locally, but the company should be set for their Halloween launch.

A spokesman for the state’s Department of Public Health said the agency would review any applications submitted by the company to make sure it complies with state laws and licensing requirements.

While customers who have tried the company’s treatments, and other similar remedies, inplaces like New York City swear by the results, one expert said there was no known cure for a hangover — and it’s better just to practice moderation when imbibing at your favorite watering hole.

“What I tell people who are drinking is to pace themselves and drink slowly, and alternate an alcoholic beverage with water so you won’t be as dehydrated the following the morning,” said Dr. Lipi Roy, an internal medicine physician at Massachusetts General Hospital’s department of medicine.

Roy said she hadn’t seen data to support claims that IV drips are a surefire way to curb the morning headache and nausea that can be brought on by an intemperate night on the town.

“We always want a quick fix,” she said. “But it’s far cheaper to hydrate in advance, and drink at an appropriate pace.”

The company stressed that they do not promote alcohol abuse, and if their physician feels that a client is requesting treatment due to alcohol abuse, they would refer them to the proper treatment center.

Nadelson said his company isn’t currently involved in any clinical trials specific to IV treatments for hangovers, but direct fluid absorption has been proven to work in treatment of various types of ailments, including nausea and dehydration.

“We want to be sure that our patients are treated ... with true professionalism and true excellent medical care,” he said.

Steve Annear can be reached atsteve.annear@globe.com. Follow him on Twitter@steveannear.