Kim K. 'got I.V. treatment before Met Gala to make her skin glow' 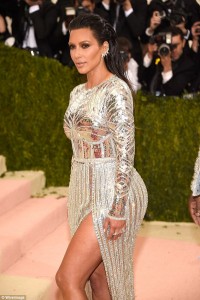 The I.V. Doc is marketed as 'an energizing, 30-minute, I.V. (intravenous) hydration therapy that will provide you with a quick recovery from the hangover, flu, jet lag, exercise fatigue, food poisoning, and general exhaustion.'

Kim reportedly chose the 'Beautify' treatment, which runs for $399 and contains a mix of B vitamins, electrolytes, and anti-inflammatory medication to help with healthy skin and hair, 'leaving you looking beautiful and radiant.'

'She wanted to have a glow for the red carpet,' a source told the publication of Kim's pre-Met Gala I.V. treatment.

They added: 'So she ordered treatment with plenty of vitamins along with the fluids and electrolytes.' Discrete: The luxury service The I.V. Doc visited Kim at her New York City home to give the star the 'Beautify' treatment ahead of the gala Radiant: It certainly didn't hurt as Kim's skin looked flawless as she walked the red carpet at The Metropolitan Museum of Art in New York City

Kate Upton had the same idea, with The I.V. Doc's Instagram account sharing a picture of her '#MetGala prep with @brycescarlett.'

Neil Patrick Harris previously promoted the service as a hangover cure following New Year's Eve, and other celebrities such as Gwyneth Paltrow and Audrina Patridge have used it as well.

Kim's husband Kanye West opted to sit out of the I.V. treatment according to the source, who added that the Keeping Up with the Kardashians star was not feeling particularly chatty.