We Tried It: The In-Home Hydration Service Celebs Use to Treat Hangovers 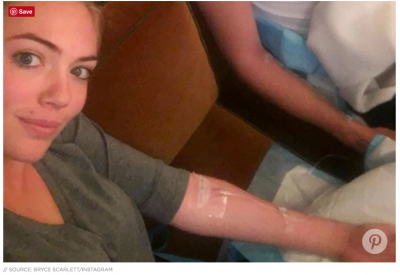 Level of Discomfort:On a scale of 1 to 10, I’d give it about a 3. Overall, it’s pretty painless — there’s a pinch when the needle goes in, but the main discomfort is feeling cold. As the solution enters your body, it cools you. My lovely nurse joked I was lucky she didn’t use an I.V. bag that had been sitting in her car (in the freezing weather), and then she brought me a blanket.

Doctors and nurses have known this secret for many years — if you want quick relief from your hangover/headcold/nausea, take a break from your rounds, hide in an empty hospital room and plug yourself into an I.V. drip to hydrate and get some quick electrolytes. Now, non-medics of all sorts, including celebrities likeKate Upton,Gwyneth PaltrowandNeil Patrick Harris,can do the same — in the comfort of their own homes.

After setting my appointment, a doctor called me to determine which cocktail would be best for me. We settled on the “Detox,” which costs $219 and includes 1,000 mlof fluid and one medication from a choice of anti-nausea, anti-heartburn or anti-inflammatory. We decided the anti-inflammatory made the most sense since I wasn’t experiencing any acute symptoms.

When I had my appointment a few days later, I was not hungover. I don’t know what I was thinking, I should have gotten drunk the night before in the name of journalism, but I had only a very reasonable single glass of wine with dinner the night before. However, I was dehydrated. The nurse pointed out that my lips were cracking and my skin looked dry. I thought back on my water consumption over the past few days and admitted it was minimal.

I was also planning on drinking the next night (my husband’s birthday) and the night after that (Christmas Eve), so I was hoping the I.V. Doc could help prevent a hangover, not just treat one.

My reporter had passed on the assignment because she’s afraid of needles. I have no pain tolerance asI’ve said before, so I was nervous too, but the nurse inserted the I.V. with minimal pain and her careful work left no bruises. And being in my own living room instead of a cold doctor’s office made the experience much more comfortable. 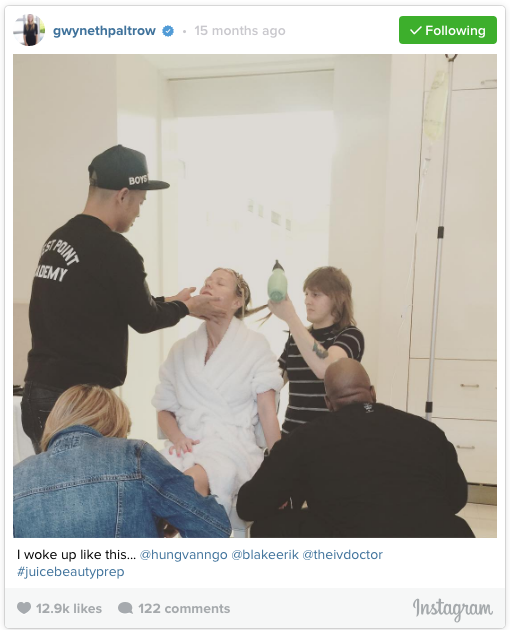 Although the service is marketed towards the party crowd, the nurse said about half of her clients are people who are feeling ill, often with the flu. There is a “Flu Relief” option on the menu for $399, which is twice the fluid at 2,000 ml, a big dose of Vitamin C, a multivitamin, and anti-nausea and anti-inflammatory medications. There’s also a “Food Poisoning Relief” option for $289 with medication to treat diarrhea, nausea and pain.

Next time I’d like to try the “Beautify” which promises beautiful skin and hair with its cocktail of B-vitamins. You also get a massage!

The Verdict:I definitelyfelt re-hydrated after the I.V. Doc appointment. My lips, in particular, looked and felt less dry after a half an hour and the 1,000 ml. It’s hard to say if it lessened my hangover the following weekend — I did still have one after all the parties, but it was probably less severe.