This Really Works: An IV Drip That Cures Hangovers 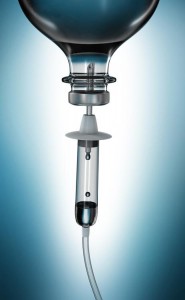 Everyone has their own hangover cure, from consuming greasy food to sweating it out at the gym, but when I heard about a new IV drip designed to combat the results of too many cocktails, I was curious. Chrissy Teigen, Rihanna, and Cara Delevingne have all used a variation of the “party-girl” drip. In the name of research, I went to a house party and had a few more drinks than I usually do. I woke up with the worst hangover of my life (note to self: shots are never a good idea). To see if the IV drip would really make me look and feel bright-eyed again I called The IV Doc.

The day after the party, a glamorous nurse, named June Lacaya, came right to my apartment, ready to inject me with vitamins, saline, and electrolytes. “I’m like Uber—for IV drips!” Lacaya said. Lacaya is a full-time emergency room nurse, and the IV Doc gig is what she does on her day off. She often works with celebrities—she had just seen a “very famous” one the night before, but couldn’t disclose her name to me—including Neil Patrick Harris.

A bag of saline costs $4, but IV Doc charges a starting price of $199 for the basic Detox package, which is 1000ML of electrolytes and saline. So, while plebeians like you and I are chugging water and Gatorade to fight our hangovers, it turns out some people are sticking needles into their arms for the same effect. I couldn’t help thinking, however, that it seemed like a pricey solution that worked about the same as my regular Gatorade cure (which costs about, oh, $195 dollars less).

In addition to the base solution of electrolytes and saline, Lacaya gave me the Beautify infusion, which she invented herself. “This has all the B-vitamins, like biotin and niacin, which give you healthy skin, hair, and nails,” she said. “My female clients were asking for these separately, so I thought, why don’t we just create a package to make things easier?”

I was also given an intravenous injection of a multivitamin, a nonsteroidal anti-inflammatory drug, and more vitamin B12 to give me a boost of energy. The entire procedure took less than 30 minutes because I only had one liter of fluid—a normal-sized person would get two liters for a procedure that takes 45 minutes, but at a height of 5’1”, it would be too dangerous to give me more fluids. Immediately after the procedure, I felt drowsy and lightheaded, which Lacaya said was just the anti-inflammatory medicine working on me. “Take a nap,” she suggested.

I tucked myself into bed and when I woke up in the evening, my headache was gone and I felt like the previous night had never happened, which was why I then walked two miles in the snow to see some friends and drink more wine. I had forgotten the agony in my body less than 12 hours ago.

The truth is, you should just drink more water and less alcohol if you don’t want a hangover. It’s just common sense, though common sense is less common on Saturday nights. I highly recommend the IV Doc if you have money, no desire to drink your fluids, and want to pretend you’re recuperating after a party full of celebrities like Neil Patrick Harris.