Got a hangover? Don’t be a drip, here’s the cure 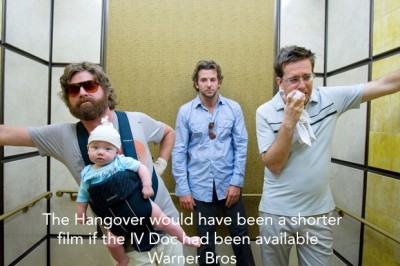 Feeling blurry and nauseous? Got a horrible headache? Help is at hand. An American company that is hoping to become the Uber of hangover cures will send a nurse to your home at a moment’s notice to pump you full of rehydrating fluid intravenously.

The IV Doc, based in New York, says that its “discreet luxury service” is aimed at 24 to 44-year-old professionals who want to “get on with their day” and sober up before negotiating the mega-deal or meeting the boss. Its website boasts: “In as little as 30 minutes, the IV Doc can get you back on your feet and enjoying the day, HANGOVER FREE!”

Fuzzy-headed customers who cannot get their act together before they leave home need not worry: the company is happy to provide treatments at the office, despite the obvious risks of discovery by those in charge.

“There are a lot of busy people out there who don’t want to go to the emergency room or wait for a doctor,” Rochelle Menda, chief operating officer of the IV Doc, said.

The company was founded by Adam Nadelson, a general surgeon, and his father Elliot, a urologist with a private practice in New York City. After observing that dehydrated patients turning up at hospital often did not need complicated care, the younger Dr Nadelson had an idea.

“He saw that some people just needed a quick fix and thought: ‘Why not bring it to their homes?’ ” Ms Menda said. She insisted that the service did not promote alcohol or encourage overindulgence. “If one of our physicians feels that a client is calling a lot because of alcohol abuse, they will direct the client to special services for alcoholism,” she said, adding that every client had a telephone consultation with a doctor before a nurse was sent out with the drip.

The company says that its IV cocktails, containing electrolytes and vitamins, can be customised to treat symptoms of vomiting, headaches or heartburn and are based on formulas that are “time-tested and proven in hospital emergency rooms”. The drips are said to work better than common hangover “cures”, such as glugging down gallons of water, because 100 per cent of IV fluid is absorbed by the body, against 50 per cent or 60 per cent of drinks and supplements taken orally.

The company, which has been funded by private equity investors, employs more than 200 nurses and claims to be profitable after only two years. It already operates in New York City, Long Island (including the Hamptons), Chicago, Los Angeles and San Francisco, is planning to open in Boston and has not ruled out expansion to Britain.

The IV Doc - whose success has attracted competitors - does not target only hangovers; it advertises its services as perfect for a quick recovery from flu, jet lag, exercise fatigue, food poisoning and general exhaustion. Prices range from $199 (US) for a quick fix for jetlag and fatigue, to $399 (US) for flu relief.

Daria, a professional from San Francisco, first heard about the IV Doc when she attended a friend’s wedding in New York in June (Alexandra Frean writes). “The bride had to be resurrected from the dead on her wedding day after overindulging at the rehearsal dinner. I had never heard of this kind of treatment — I thought it was for potentates and politicians and celebrities — but I watched as she had it and she turned from a very ashy green into the pinkest, most beautiful young bride I have ever seen.”

In August, Daria developed flu and called the IV Doc for a cure. “I woke up with a ragging case of laryngitis, nausea, headache and a fever. I’m the Amazon who never gets sick. I could not be sick. I had stuff that I had to get done.” A 30-minute session put her back on her feet. “It was like being on a beach with the waves washing over you; with each wave a symptom disappeared.”